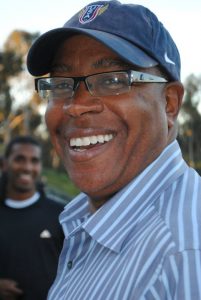 Author, Professor, Pilot, Olympian says it all about Tonie Campbell. Once, one of the fastest men in the world over the 110 meter high hurdles, this University of Southern California graduate took those skills all the way to three US Olympic team appearances and an Olympic medal.

Highlights of his athletic career boast three Olympic team berths (80,84,88) one Olympic medal, bronze in 1988, four Olympic sports festival appearances, four national championship titles, three world titles, an Indoor American record and countless international teams which he lead or was voted as Captain. He ended his career with an amazing 83% win ratio (percentage based on placing in top three finishers per race) and is one of only three men that were ranked amongst the top ten fastest hurdlers in the world for eleven consecutive years.

Tonie retired from competition in 1992 for a career in coaching and motivational speaking to youth and professionals. Presently, Tonie leads a new generation of athletes towards their dreams as he serves as Head Track and Field and Cross Country Coach of Southwestern Community College located in Chula Vista California.

In addition to his busy college coaching duties, Tonie formerly managed, coached and trained Olympic caliber athletes while acting as Managing Director/Head Coach for USA Track and Field’s High Performance Team located at the USOC’s Olympic Training Center in Chula Vista California. Tonie has additionally served as National Chair for USA Track & Field’s Development Committee. Additionally, Tonie has served as Head Manager, Pool Manager and Athlete Liaison for USATF’s International, domestic and world teams. He is one of the most highly sought after technical specialist in the sprints and hurdles in the country and consults with athletes and coaches worldwide.